The James River Art League held its 50th Anniversary Celebration Party on October 16th at the Richmond Country Club.  Area merchants generously donated the following items to be given as door prizes at the celebration.  Thanks to these Friends of the Art League for their support!
Other door prizes were donated by JRAL members, including specially labeled "artistic beverages," hand-crafted jewelry, and a year's free JRAL membership.  A highlight of member donations was small original works of art by Art League members, all to be given as prizes.

Part of the mission of the James River Art League is to promote artistic growth not only of its member artists, but throughout the community as well.  JRAL has a long tradition of recognizing the young artists of the Greater Richmond area and providing awards to help them develop their talents.

In honor of our 50th Anniversary, this year JRAL has granted a $500 scholarship to a high school senior art student who plans to continue studying art in college.  Working with the art educators of George Wythe High School, the City of Richmond's School for the Arts, a committee of jurors from the Art League identified Shakira Squire as the school's Outstanding Art Student of the Year. Her artwork was recognized by the jurors as showing "great vitality, joy, and passion."  Shakira receives the JRAL scholarship in the form of a gift certificate to be used for art supplies to help her pursue her studies.

Shakira began attending J. Sargeant Reynolds Community College this fall, with plans to study visual arts and culinary science.  We congratulate her as recipient of the 2014 JRAL scholarship, and hope all the best for Shakira in her future endeavors. 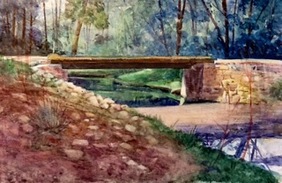 "Bridge at Woodbury Mill Pond", William A. Youngblood
Judy Youngblood Lane and her sister, Amy Youngblood Karnolt, have donated an original painting by their late father, JRAL charter member William Youngblood, to the James River Art League to honor the League’s 50th Anniversary.  The archival framing of the painting is being accomplished and donated to JRAL by Rick Michaels, master framer and co-owner of Rick’s Custom Frame & Gallery, 5702 Patterson Avenue, Richmond.  Together the painting and frame will form the cornerstone of prizes to be awarded at the James River Art League's 50th Anniversary Celebration in October at the Richmond Country Club.

The Youngblood family has also donated several of their father's prints to the League to be used as additional prizes. One of the prints, "Mill Door and Wheel", will have professional matting donated by For Art's Sake Gallery, Studio, and Frame Shop, Gayton Crossing Shopping Center.

The 50th Anniversary Celebration Committee began meeting in April, 2013 to plan JRAL's 2014 commemoration of our 50th year in the arts.  To read minutes of the 50th Anniversary Committee meetings and to access other Celebration planning documents, please visit the Members Only section of this website.  The button below will take you to the Log On page:
Members Only Log On